Knock Out Week - Round 2

If I hadn't actually watched back what happened in this episode I might have been mistaken that is was all an hallucination after one too many gins. When the taxi came to pick us up in the morning we had no idea where we were heading. Then the figure of the world famous time piece that is Big Ben came into sight! I was trying to figure out on my phone which restaurant could it be then the taxi pulled up to a restaurant with Roux above the door! Shit just got real! 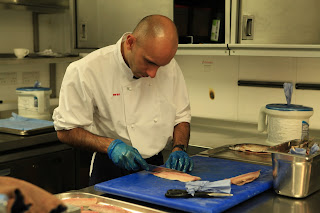 This was Roux at Parliament Square, the second restaurant of food God Michel Roux Jr and headed up by MasterChef: The Professionals 2009 winner Steve Groves! Something told me we/I was in for a real experience of what it is like to cook in a high end professional kitchen (3 AA Rosettes). Then they showed me what I would be making! Yep I was in trouble now! That bloody spinning plate has haunted my dreams ever since. Just the sheer speed, precision and volume was overwhelming.

Yes, I needed help to catch up but I didn't feel that bad because what was asked of me was more than my skill at this level could accomplish. I am a home cook and I did my very very best to get that dish out as best as I could, I literately could do no more. It's nerve wracking enough cooking in that kitchen without the cameras on you! 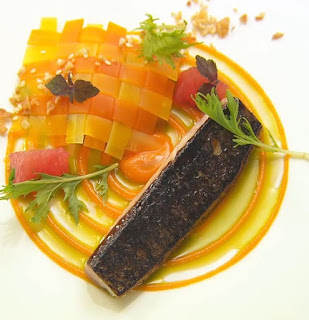 Shattered yes, put off? No. It was probably the most intense cooking I have ever experienced but it has given me an insight into another side of the food world that I might never have seen. For that I am thankful to have had the opportunity to cook in that kitchen. It was both an honour and a privilege and I hope to go back some day but as a diner!

What that experience has given me is a massive respect for all those in the restaurant business. I knew that it was difficult being a chef, I just had no idea until now. People rarely see or appreciate how much hard work goes into the food that arrives at their table.

Not rest for the wicked and back to the MasterChef kitchen for an invention test! Argh! We had a fantastic array of produce to choose from. The home economics team that work on the show are responsible for all of the produce and displays which always look amazing. I decided to try and show some skill by making pastry and stand out by using an otherwise underused ingredient quince.

Well it could have gone better! I don't know what happened really, I didn't cook out my custard enough and as for the pastry I thought when I checked the base to see if it was cooked it was, so not sure if the juice from the poached quince seeped through? Whatever happened it did not meet the grade. Gutted is an understatement. I'm just glad I didn't get savaged by Tom Kitchin!

Knock Out Week concludes on BBC One at 8.30pm tonight!