At last the day finally came for me to eat at Hang Fire's new place and what a day for it to arrive on. Earlier in the day the results of the EU referendum had been announced and the rest the day was a bit of a blur as I contemplated what the hell had just happened. When I woke from stupor I found myself gazing up at the impressive and resurrected Pump House in Barry. Home to Hang Fire Southern Kitchen and for the first time that day I felt positive about something. 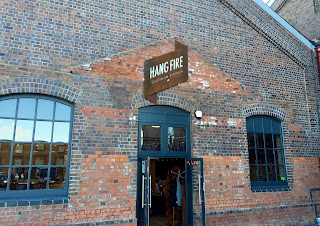 Sat at our table we had a great view over the restaurant. Think casual-industrial for the look. Then as if from nowhere we saw Shauna, one half of the HF duo, moving from table to table, taking orders delivering food and drink, chatting, cracking jokes and generally running the show, like she was born to do this! As she made her way to our table she spotted the glum look on my face and uttered the immortal words that only she could...."Brisket not Brexit" I knew then everything at least for tonight would be OK.

The next step in my healing process was a pint of Rocky Top (£4.50). A collaboration between Hang Fire and Waen Brewery. This beer is the utter pinnacle of refreshment. A beautiful colour, full of hops and bags of zing. Served ice cold it was a brilliant start. 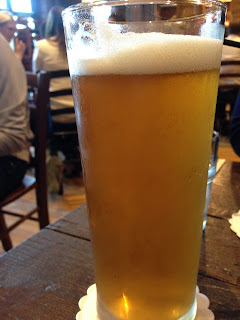 To start Mrs Clonc opted for the Lil' Cheeky Pies (£4.50) while I was all about the Smoked Wings (£6.50) in a Louisiana hot sauce. The pies were cute little parcels of meatiness. The rustic pastry encasing soft and unctuous filling of smoked brisket and ox cheeks deep and rich in beefy flavour. A side of brisket au jus to dip them into for added moisture worked well. The wings however were absolutely banging. Probably the best I have had. The spiciness was spot on, enough to make your lips tingle but still allowing the smoked flavour of the chicken to come through with a nice fruity finish. Delicious. 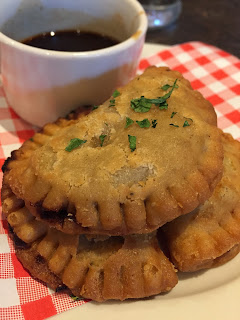 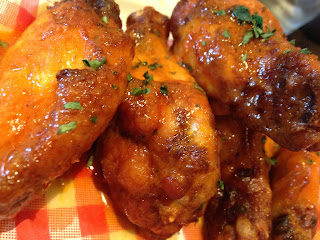 The mains soon followed. The Smoked Chicken and Waffles (£14) took Mrs Clonc's fancy and sounds like a dish Snoop Dog may order. I however was all about the Brisket (£17).

The chicken and waffles comprised of coated wood smoked chicken on the bone, savoury style waffles thins, sweet potato fries and jug of black'n'white pepper gravy. We're talking triple carb action here folks! Again the smokiness of the chicken prevailed, the sweet potatoes fries were bang on, loved the slight chew from the waffles and the thick and highly peppered gravy was much needed. If anything we think a lighter sauce/gravy would work better as the overall dish although tasty is really heavy. 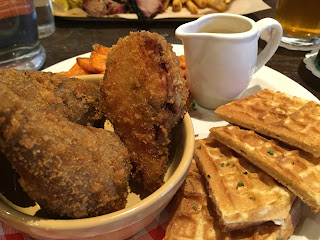 On my plate I was rocking 12 hour Hickory smoked slices of brisket, sat on top of Texan Toast, dressed with au jus gravy, house fries, 'slaw, pickles and twice smoked hunks of brisket known as 'burnt ends'. The brisket was insanely good. Rich and deep in meaty flavour with the taste of  smoke running through it. Soft and melt in the mouth. I loved the way the Texan Toast (Hang Fire's artisan take on cheap white American bread) soaked up all the gravy and meat juices, so good. The show stopper was the 'burnt ends'. Wow. These little hunks of meat were unbelievably tender and packed full of flavour. Sublime and a must for any meat lover. 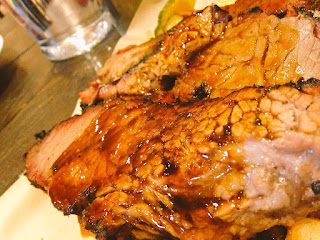 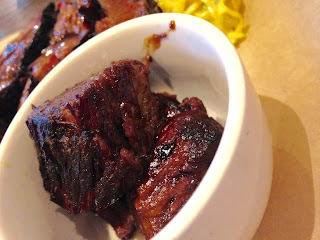 Well by this point we were done for. Not an inch left for desserts. Sam, the other half of the HF duo, definitely smashed it on the food front tonight!

There was a lovely atmosphere in the restaurant just so chilled. So much so we felt quite comfortable chatting to the table next to us who were similarly impressed with the place and similarly deciding whether desserts were a good idea or not.

If I was to sum up Hang Fire Southern Kitchen in one word I would use generosity. Generosity in their welcome, in their delicious food and with their time. If you have ever had the pleasure of speaking to Sam and Shauna their enthusiasm and passion for what they do is so infections you can't help wanting to be a part of it!
To paraphrase the Hang Fire ladies, "Come Thirsty and Come Hungry". Go!