I love going out to eat. I love the whole process of it, choosing where to go and when. Deciding what type of food or style takes your fancy and making a booking. When you go out for food you have little distraction from things that normally occupy your everyday life and you can converse, catch up and relax with whoever it is you have decided to eat with. In this case it was a few friends who I had not seen for a good long while. Where to go? Well after a brief discussion it was decided that Italian was the way to go. Cue Cardiff's latest restaurant offering, the Italianish Porro. 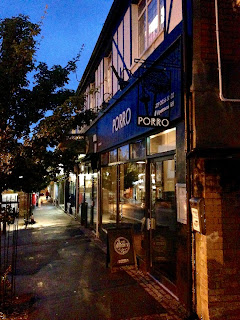 Italianish by its own admission, Porro is the suburban sister of the successful Potted Pig and only opened a few weeks ago. Set in heart of Llandaff in Cardiff, Porro sets it's stall out as 'modern British cuisine inspired by Italian cooking and eating'. With an emphasis on celebrating simple, quality ingredients. Sold!
The large windows at the front of the restaurant glowed invitingly this particular evening and revealed a long dining room, with the bar to one side and a door that glimpsed into the kitchen at the back. Into the restaurant we were greeted by matte grey panelling, exposed brick and a lovely parquet floor. Simple yet smart tables extend down one wall of the restaurant with a few tables near the windows and a large leather clad booth near the bar. I approve greatly of the look. We were promptly sat at our table and given menus. Now as anyone who has caught up with friends they have not seen for a while will know the menu often does not get looked at until at least the third time of asking from the waiter. They were very good with our constant chatting and we did stop talking to order drinks, of course. We finally looked at the uncomplicated and uncluttered menu and decided what to go for. 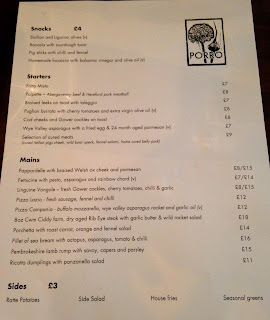 The starters arrived with much anticipation as catching up is hungry work and we had all ordered different starters. First up braised leeks on toast with taleggio. Sounds odd, looks not especially appetising but surprisingly delicious. Sweet and buttery leeks on some thick white toast providing texture and richness coming from the cheese. 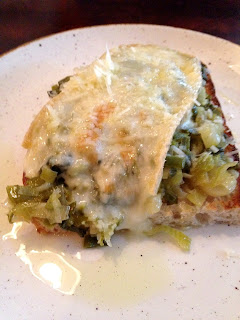 Continuing the toast theme was the next starter cod cheeks and cockles on toast. Beautifully plump cockles and meaty cod cheeks in a light sauce with some crunchy toast was also a winner and looked inviting with the cockle shells open and touting their wares. 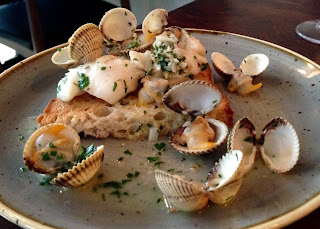 The penultimate starter was polpette, a meatball of beef and pork. The menu stating the provenance of each type of meat. What arrived was a cricket ball sized meatball, drenched in a tomato sauce and some bread to use as a carrier. My dining partner who ordered this enjoyed it very much with no hint of a complaint. 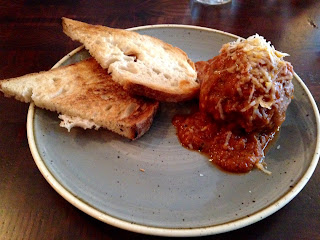 Lastly I went for my favourite asparagus. Wye valley asparagus with a fried egg and aged parmesan. I asked if the egg could be poached instead of fried and they obliged without fuss. These spears of asparagus were cooked perfectly, sweet and still had some 'bite' present. It was a joy eating them with the yolk that gushed out of the poached egg and the parmesan provided an extra hit of seasoning and richness. Its fair to say starters were a success. 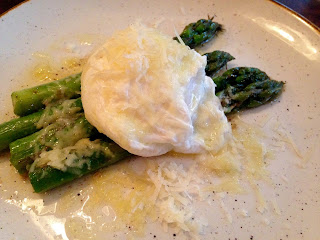 Mains. We all pretty much ordered differently for our mains as well. First up was an 8 0z rib eye steak with garlic butter and wild rocket salad. This as the person who ordered it stated it was the nicest steak he has had in a while, praise indeed and cooked exactly how he requested it. 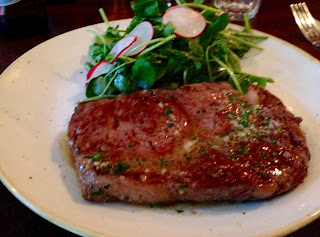 Next up pappadelle with braised ox cheek and parmesan. My dining partner who ordered this loved the deep, rich and meaty shredded ox cheek in the pasta with the tomatoes in the sauce provided a nice zing to cut through the richness of the dish. 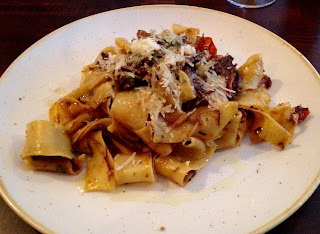 Lastly two of us ordered lamb rump with savoy, capers and parsley. I had been craving lamb for the last couple of weeks so my culinary prayers were answered with some beautifully cooked lamb rump. Well seasoned, juicy meat with some crispy fat was delicious. The jus it sat in was excellent. I also like the idea of shredded savoy with capers in it but the shear amount of capers was over kill and made the whole dish taste too salty if you had too much of it. We ordered some ratte potatoes to share and seasonal greens. The potatoes were excellent  and the greens were ok. 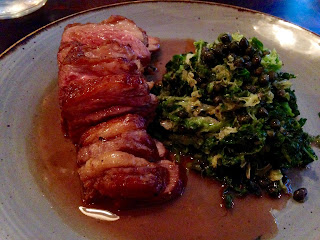 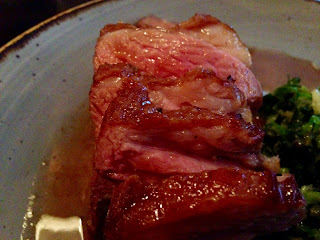 Following a request for a good ten to fifteen minute break we then ordered desserts and you guessed it, all different. Again from the top, dark chocolate torte with salted chocolate sauce and hazelnut ice cream. I didn't even get a sniff at this, it was devoured with a great smile on my friend's face. 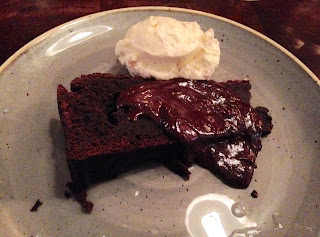 Next almond, orange and lemon tart with mascapone. Described as very nice by my friend who ordered it, again not even a hint of a crumb passing my way. 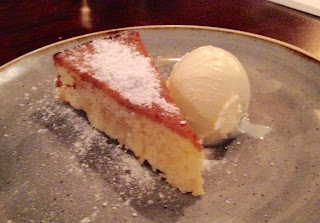 What happened next when the vanilla pannacotta arrived with biscotti and campari oranges was spontaneous sniggering at how obscenely wobbly the the pannacotta was. Yes we are easily amused by wobbling desserts. Needless to say no complaints from the person who ordered it. 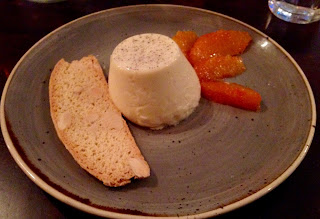 Lastly my tiramisu parfait with sable biscuit was a really rather dowdy end to the meal and could of had more oomph. The biscuit was lovely. 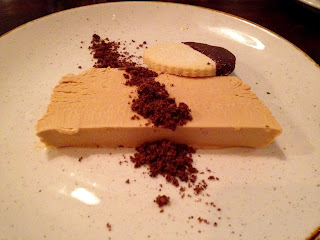 All in all food and drinks (five beers, one soft drink and one coffee) the bill came to £158.00 without tip. I must say that the service was good yet informal and not obtrusive at all. Just right in fact.
When I looked around the restaurant during dinner and could see mainly groups of friends and family out having a great time and enjoying good food, I can honestly say that I think Porro has done well in creating a restaurant that does have Italy at its heart where food is so central to gatherings. I love the atmosphere and I love the way the menu tells you they have tried their utmost to source the very best of local ingredients for their diners. This is a lovely restaurant where no culinary boundaries will be broken but where good cooking and excellent ingredients are allowed to be the centre of attention. Bravo Porro.