Marmalade Soufflé with a White Chocolate and Vanilla Sauce

This week I was presented with a lovely and unexpected gift, a large pot of home made marmalade. The kindness and thoughtfulness of someone to think that I may enjoy it and to say thank you made my day. There is something special about a gift that has been made by someone rather than being bought. Perhaps it is the added thoughtfulness and the appreciation that someone has taken the time out of their lives to make something and then offer it as a gift. I am fully aware the pot of marmalade was not made solely for me and that the person probably had some excess to demand but the fact that they thought I might like to have it is good enough for me.
I feel very much the same way about cooking for people and eating food that has been made by other people. It is not only the food itself but the time and dedication that someone has spent to serve up an amazing dish that I really appreciate as well as the food.
Back to the marmalade, I was reliably informed that it was made with the finest Seville oranges and it tasted fantastic! A perfectly balanced bittersweet taste with lovely shredded bits of orange peel, delicious!
So thanks to this lovely gift it has inspired this recipe which tackles the mystical world of soufflés! This soufflé is delicious and a real showstopper with the added bonus of being straight forward, no really it is! I've paired it with an easy white chocolate and vanilla sauce which I think complements the bittersweetness of the marmalade in the soufflé. If like me you don't have a pot of home made marmalade knocking around or are not planning to make your own then I urge you to buy really good marmalade with shredded pieces of orange in it to provide some texture in the soufflé. 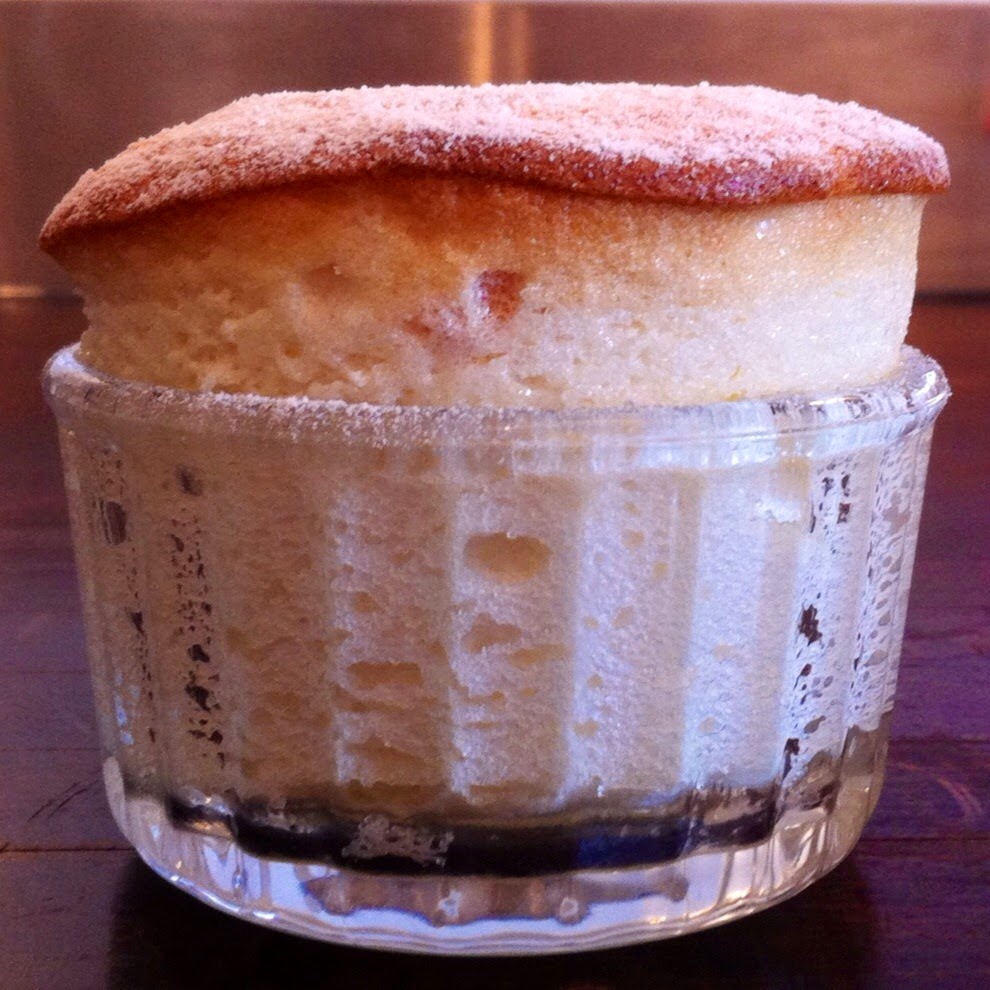 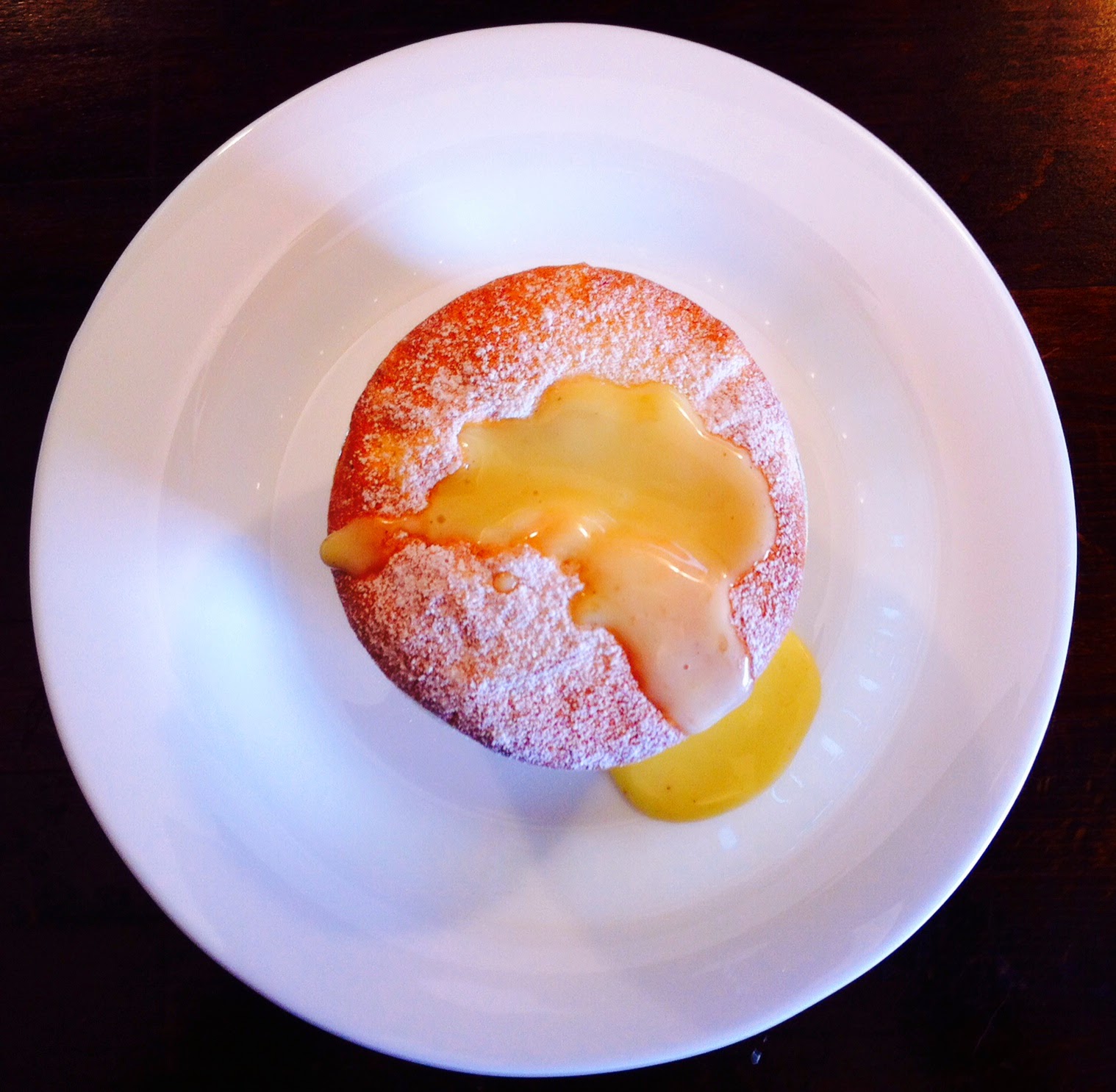 Marmalade Soufflé - Makes enough for 4 soufflés
White Chocolate and Vanilla Sauce - makes plenty
Preheat an oven to 200 degrees centigrade/gas mark 6. Firstly brush/rub the insides of four ramekins with the softened butter making sure all surfaces are covered. I like to use some greaseproof paper to rub the butter around the ramekins and then spread the butter in an upward direction from the base to the rim, almost creating a track for the soufflé to follow. Next add a little caster sugar to each ramekin and coat the insides with the sugar which will stick to the butter this will help the soufflé to rise. Rotate the ramekins so that all the buttered surfaces are covered with the sugar, tip out the excess sugar and set aside in a cool area or pop them in the fridge.
Place the marmalade into a large bowl and mix with the flour until combined. Next beat the egg whites with 75g of the caster sugar in a large clean bowl until they form semi firm peaks. I like to use an electric whisk for most of this stage and then switch to a hand whisk to have complete control on being able to judge when the right consistency has been reached. I do this  as it is easy to over whisk the egg whites which causes it to collapse and as a result your soufflé will not rise.
Combine the egg whites with the marmalade and flour mixture being sure to fold the ingredients together to prevent knocking all the air out of the egg whites which again will lead to the soufflé not rising.
Divide the above mixture into the ramekins and smooth the surface so it is flush with the edges then ease the mixture away from the edge of the ramekin using the tip of your thumb or a tip of a knife creating a kind of boundary. This will help the soufflé to rise and create the characteristic soufflé appearance.
Place on a baking tray and bake in the oven for 10-12 minutes making sure not to open the oven door during cooking (even and constant temperature is essential) and if possible keep an eye on them (I appreciate that not everyone will have an oven that has a see though front and in which case I would cook for 12 minutes then have a cheeky look). Ideally you want the soufflé to have risen and the top to have formed a thin 'crust'.
While the soufflés are cooking and if you can bear to pull yourself away from looking through the oven door, start to make the sauce. Simply place all the ingredients into a pan over a low heat until all the chocolate has melted making sure that it doesn't 'catch' on the bottom of the pan. Transfer the thick speckled sauce to a small jug.
Remove the soufflés from the oven, dust with a little icing sugar and serve immediately! As for the sauce, create a hole in the top of the soufflé and pour away!

There you have it, my take on a marmalade soufflé. I dare say that this would follow the beef Wellington recipe perfectly! Enjoy and please get in contact via kitchenclonc@gmail.com if you have any questions or feedback.
Posted by Kitchen Clonc at 04:21